Our first volume contains reviews about the struggles of a small newspaper against a dictator in “The Post” to one man’s fight against another dictator in “Darkest Hour” to an Italian summer in “Call Me By Your Name.” As always, we’re rating them based on our system from Aelous worthy (1 star) to Sky god worthy (5 stars).

The Post: The President Richard Nixon I know will muster the full power of the presidency and if there’s a way to destroy your newspaper, by God, he’ll find it.

“…the Founding Fathers gave the free press the protection it must have to fulfill its essential role in our democracy. The press was to serve the governed, not the governors.”

Repeated time and time again, there were, and there are, many stories like this, about what The Washington Post went through, and there were many stories too about the indifference on this struggle, about how the masses would shrug their shoulders until it’s too late. But what is different to the Post‘s story, and in extension, to the film compared to many others before and after it?

The answer is none. This film, and all those made before and will be made after this one, is just a prodding to the masses to remember and never forget.

First on a lighter note, the production of this film was fascinating to us, the scenes showing us the analog era of reporting, reminding us of the things, the modern journalistic things, we should be grateful that we have today.

The film focused on a single event during 1971, the event which determined the existence of the free press as we know it today. Jam-packed in just one day, the movie tells the story of how the struggle to publish the so-called “Pentagon Papers” of the Vietnam War evolved within the newspaper organizations, focusing briefly on its characters, and ending in a triumph of human’s freedom to express himself, as much as it ended in journalistic triumph.

Darkest Hour: Before the End of the Beginning

The Darkest Hour features the story of the great orator Winston Churchill, the little known private life, and the conflict within the British government as the Dunkirk campaign closes. To surrender or to fight? And standing on the center of this conflict was Churchill himself.

The movie couldn’t show Churchill’s early days, the fact that he’s school performance was abysmal and that he just rose to the ranks because of his family’s title. It couldn’t show either the politician who was so averse to popular programs for the masses it led to his defeat shortly after World War II ended. But this film showed those crucial hours when the world needed strength and courage, and this one flawed man stood up, using his words, to bring his country, and the world, the victory they were craving for. That’s what the film did: reminding us of the pivotal role Churchill played in those crucial moments in our history.

Like “Dunkirk,” “Darkest Hour” was not made to record the day-to-day battles which occurred during the war, a bummer for history fans. But in the end, they will find it satisfying that an important moment like this one was given light, and in a superb fashion.

It is not to say that the movie lacks historical trivia to watch out for. It showed the complicated relationship of Churchill to King George VI, and also his relationship with the majority party in the parliament, and how he navigated it amid the cowards led by former Prime Minister Neville Chamberlain, who helped Adolf Hitler almost win the war. It gave an unrestricted access to Churchill’s life during those moments, including his conversation with a laughable US President Franklin Roosevelt, whose slowness to react by the way, contributed to the extension of the war.

“Darkest Hour” might be another one of those films about a piece in our history, but its depth, the way it tried to portray this important moment in our history, is worth watching. 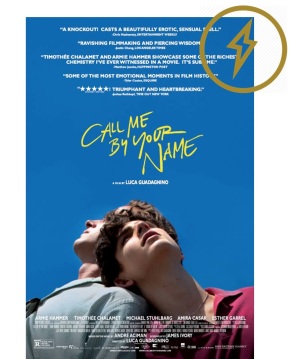 Call Me By Your Name: Who I am when every part of me swears it bears my name

“If you remember everything…then before you leave tomorrow…and there’s not a thing left to say in this life, then, just this once, turn to me…and, as you did back then, look me in the face, hold my gaze, and call me by your name.”

There was a line written by André Aciman, the author of the book of which the movie was adapted, where Elio, the main protagonist, said: “there are easy ways to bring back summer in the snowstorm.” Indeed, this movie brings back to us the summer of our childhood, whether or not we have had Elio’s experiences.

Luca Guadagnino’s “Call Me By Your Name” was one of those films that took so long to be created (almost ten years, we’ve counted), and like Elio’s opening up to Oliver, his “love interest” (for lack of a better term) in the story,  it was worth it at the end. It is always a joy to watch something you’ve read be made into a film, but almost always, these films come short of the readers’ expectations. Not this time.

It was like the characters were propped up straight from the pages of the book, the setting so similar we wonder if the place is the real “B” in the story. Nonetheless the film has its shortcomings and limitations, while sometimes it shines more brighter than the story as told by Aciman.

Let’s start with Elio. We know, in the book, how he was so obsessed with Oliver, if you’re not convinced take this as an example: “I’ll play anything for you till you ask me to stop, till it’s time for lunch, till the skin on my fingers wears off layer after layer, because I like doing things for you, will do anything for you, just say the word, I liked you from day one.” The Elio in the movie was somewhat different from the book. While the Elio book version was loud, shouting his feelings using his words, he was loud because we can read his words while the movie version of Elio was quiet in his obsession, his face holding the lone clue to his feelings.

The narration in the movie was cool, because the movie, by and large, remained faithful to the book’s story. There was a catch though: it failed to capture the long agonizing wait the readers felt in the stretches of the book’s pages as Elio wavered in revealing his feelings for Oliver.  (In the book, it took until page 163 for this to happen. “…to surrender, to tell him this is who I am, this is who you are, this is what I want, there is nothing but truth between us now, and where there’s truth there are no barriers, no shifty glances, and if nothing comes of this, let it never be said that either of us was unaware of what might happen. I hadn’t a hope left. And maybe I stared back because there wasn’t a thing to lose now. I stared back with the all-knowing, I-dare-you-to-kiss-me gaze of someone who both challenges and flees with one and the same gesture.”)

We also failed to feel the full remorse Elio felt after finally being in bed with Oliver, though we had a glimpse of it. (“Could intimacy endure once indecency was spent and our bodies had run out of tricks?”)

The good news is, movie Elio was just the same as the book Elio, sentimental, and at times bordering on classical cheesiness, like most of shy boys and girls whose world revolves in books and authors long dead and gone. The actor playing Elio, Timothée Chalamet, was perfect in every aspect, so much so that just by watching him you could feel the pain in your chest, the pain of having someone and losing him or her. On the other hand, the movie simplified Elio’s relationship with Marzia, wherein in the book, it was a complicated as it was simple.

The director failed to achieve the “emotional travel” he was aiming for when it refused to reveal the sexual intimacy of Elio and Oliver while portraying, in blunt details, the sexual intimacy between Elio and Marzia, a move which is tantamount to hypocrisy. While the book courageously traveled this path, the film refused to do so, sealing the fate of this film to have nomination nods while winning no actual major awards. The writer, James Ivory, summed it up the best: “Nobody seems to care that much or be shocked about a totally naked woman. It’s the men.”

The movie chose to end the story after Oliver left for America, and while the ending was great (Chalamet’s acting in the last scene was superb), in doing so, the movie missed out half of the book’s story, for “Call Me By Your Name” is as much as the story of Oliver and Elio during the summer in Italy as it was the story of Elio after Oliver left. (“You could have had this instead. But going back is false. Moving ahead is false. Looking the other way is false. Trying to redress all that is false turns out to be just as false. He came. He left. Nothing else had changed. I had not changed. The world hadn’t changed. Yet nothing would be the same. All that remains is dream making and strange remembrance.”)

The great thing the movie did was to explain in clear details why Elio and Oliver did not commit to each other while the book, surprisingly, was somehow vague in it. (I could easily have thrust myself on him years ago, married or unmarried—unless it was I who, despite all appearances, had all along been unreal and spectral myself.)

One last thing the movie did: it made the story seemed to be more real, unlike that from the book which, for me, was so unreal, bordering on dreaming. Maybe perhaps because I can’t fathom a life like Elio’s?

“Elio,” I repeated, to say it was I speaking but also to spark our old game and show I’d forgotten nothing.

“It’s Oliver,” he said. He had forgotten.