They Both Die at the End

“No matter how we choose to live, we both die at the end.” 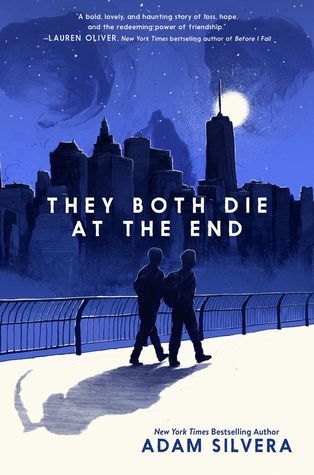 “What would you do if you found out you were about to die?” That was the question the author Adam Silvera apparently asked random people when he was writing this book. To give more light on this question, let us introduce the book first. “They Both Die at the End” has this world where a technological advancement led people to know if they will die that very day via a midnight phone call from a company which apparently can forecast death called “Death-Cast.” It follows the story of two “deckers,” the name attached to people who received such call, Mateo and Rufus, as they try to live their lives one last time.

So back to the question, what would you do if you found out that you only have less than 24 hours to live? That’s what Silvera tackled in this book as he narrated the story of Mateo and Rufus, two people who met at their End Day, two strangers who tried to live a lifetime, to seek their one last great adventure, on a single day. “They Both Die at the End” has a confusing intro, but once you settle on to this weird and scary world, there is no going back, and you will definitely want to know what will happen to the both of them. Well, they die at the end, but how?

“I’m holding myself back. I’ve spent years living safely to secure a longer life, and look where that’s gotten me. I’m at the finish line, but I never ran the race.”

They are many what ifs in this story that it took longer for me to write a review for this book. Spoilers coming up so here we go. The story of Mateo and Rufus shows a series of events connected with each other. The two of them used this app called Last Friend so they will not die alone. Rufus fled his foster family after the police pursued him, and Mateo was all alone, his father in a coma. What if Mateo decided to stay inside his room, never using the app? What if Rufus did not beat up the boyfriend of his ex-girlfriend that led him to flee his house and made him decide to not die alone, hence using the Last Friend app? The connecting stories of other minor characters in the book are also cool, as we meet deckers and non-deckers alike, their stories crossing with that of Mateo and Rufus, making the readers ask if the actions of these characters could be changed, would the destiny of the two main characters also change?

But the book is not about the ifs of the stories. The book is not about death either. Rather, the book is about finding something special in the story of Mateo and Rufus: the unforgettable moments when you’re hours are fading fast, the reminiscing of the times with your family and friends as you bid farewell to them, the courage to take risks while preparing for the worst, and living life one last time before facing death.

“Because I refused to live invincibly on all the days I didn’t get the alert, I wasted all those yesterdays and am completely out of tomorrows.”

I’m more familiar with Mateo’s life, being a loner myself, who on his living days, failed to take risks, to live life to its fullest as they say. His your typical boy who stayed inside his room, who, even on his End Day, refused to take a step on the outside world to visit his dad inside the hospital to say goodbye. Rufus’ story is somewhat different. At first, I thought he was this thug who will change by meeting Mateo, but I was surprised with his story: the friendship with his titular Pluto brothers and sister in his foster home, the grief, and anger, and guilt he was feeling on losing his family in one single day after they received the Death-Cast call. Mateo and Rufus’ story, their final day, was not spent with them racing against time,  but rather savoring each moment while waiting for the end to come.

The concept of the book is not new, but the way it was presented is refreshing, with alternating points of view of Mateo and Rufus. There was no over the top moments here, just simple ones where they eat their last breakfast on Rufus’ favorite Diner, meeting Mateo’s dad in the hospital, and Mateo saying goodbye to his best friend Lydia. The hospital scene where Mateo sang for his father and on the scene on Lydia’s house where he fled, never saying goodbye, never telling his friend that he will die that day, were both heartbreaking. But Rufus’ farewell with his foster family, the way it was interrupted, and the scene where he fled from the pursuing police officers elicited both sadness and anger in me because of the unfairness of it all. The bar scene, the part where they sang together, borders a Hollywood script, but the way it was written is not cheesy. I like how Silvera described the song they were singing, making the scene very vivid to me as I read them. Making Mateo a hero at the moment where he saved Rufus from being shot is also cool.

The simple activities and moments the two shared are what made the book real, the sadness and simple joy I felt while they eat their breakfast on that early morning, the irritation I felt when they did that fake sky jump thing, the visit to the graveyard of his mother, building a Lego set inside the train, all of them is what makes the story of Rufus and Mateo more real to me. Reading the book felt like there was a sunshine hovering on my head despite the dark ending I knew would come.

“…walking toward death with every minute we lose, walking against a world that’s against us.”

This is a love story between Mateo and Rufus. Most reviews will mention that their relationship is special because of the LGBT factor. But I beg to disagree. All relationships are special, and raving about them being gay does not make it more special, it makes it ordinary. At first, I was not impressed with the need to turn this into more than a story of friendship, but I get that what they shared on that single, last day was far more special than any friendship could provide.

The book will inspire us to dream bigger, delving into the question of how to live a life and not waste it. That was what this book taught me. You readers will cry, and the end will be sad, but that’s life isn’t? And if anything, this book taught me that entire lives aren’t lessons, but there are lessons in life.

Goodbye Mateo. Goodbye Rufus. Thank you for your story.

“No matter when it happens, we all have our endings. No one goes on, but what we leave behind keeps us alive for someone else.”