For our fourth movie review release, we take a rare glimpse into the relationship between the beloved children’s author A. A. Milne and his son Christopher Robin, whose toys inspired the magical world of Winnie-the-Pooh in “Goodbye Christopher Robin,” to life the Brad Cohen who grew up with long-un-diagnosed Tourette syndrome in “Front of the Class,” to the story of an Israeli lawyer and a Palestinian student in “Out in the Dark.”

A rare glimpse into the relationship between beloved children’s author A. A. Milne and his son Christopher Robin, whose toys inspired the magical world of Winnie-the-Pooh. Along with his mother Daphne, and his nanny Olive, Christopher Robin and his family are swept up in the international success of the books; the enchanting tales bringing hope and comfort to England after the First World War. But with the eyes of the world on Christopher Robin, what will the cost be to the family?

Set in the tragic background of the tragedy of two World Wars, Goodbye Christopher Robin tells the story in the eyes of the beloved children’s author A. A. Milne, a character beset with so much sorrow it infects the whole film all throughout the end credits. This is not a story as told by Christopher Robin himself, who was forced all along to stand on the sideline as the writers tell the story of the famous character Winnie-the-Pooh. Ultimately, this leaves us confused, and with the dark background of a beautiful forest in Sussex, the first few minutes (a third of it really) of the film made it hard for us to navigate.

But it is the strength of Goodbye Christopher Robin. While most critics point out the darkness of the film, what made it stand out is how Milne, through the help of his son Christopher aka Billy Moon, created a story that would ultimately bring light to a war-torn world. It is a delight to watch as Winnie and Piglet and Eeyore and the rest of the characters came to life. This film is fantasy and real world combined with the innocence of youth helping the characters weave their way out of the specters of wars.

Goodbye Christopher Robin taps into the affection and childhood familiarity of  Winnie-the-Pooh and his friends, and the fact that the audience and the critics felt “uncomfortably guilty” in causing Christopher pain says everything about what the movie wanted to tell its audience: sometimes beautiful stories are created from sorrow, and maybe we are complicit in causing that sorrow, but ultimately what matters most is that the story, that beautiful story is out there for all the world to read.

There are stories about authors from C.S. Lewis in “Shadowlands,” Lewis Carroll in “Dream Child,” J.M. Barrie in “Finding Neverland” and P.L. Travers in “Saving Mr. Banks,” but maybe Goodbye Christopher Robin is not about A. A. Milne. It’s a story of a boy and his toy, roaming deep within the woods. It’s a story about good things, the fun things, and a world full of imagination.

Front of the Class: See the world and say “I will” not “I can”

Nerdy Brad Cohen grows up with long-un-diagnosed Tourette syndrome, so even his own father, contractor Norman, keeps scolding the ‘impish’ boy. Fully accepted only by kid brother Jeff and their divorced mother with custody, who ends up suggesting the novel syndrome to their surprised family doc, Brad embraces his new status and challenge, refusing to be disheartened or foolishly smug. An understanding principal at his new school makes the difference, so he resolves to aim at a teaching career, getting great grades. Still it takes forever to get hired at a rare open-minded school. Even there, bigot parents nearly undo his brilliant class efforts, but his brother and father, who keeps suggesting Brad should join the family building firm for good, surprisingly save his social life while a blind Internet date proves a lasting hit even if it takes Jeff to make Brad hope for a lasting relationship.

Jimmy Wolk’s performance as Brad Cohen in this film, a man who grew up with long-un-diagnosed Tourette syndrome, should take a lot of credit on this uplifting story about human triumph against seemingly insurmountable odds. Wolk’s portrayal of Cohen, his charm, shine all throughout the film, and in a weird way, made him cooler with the Tourette syndrome in his midst. His performance was just extremely authentic and we felt it.

It’s kind of important for the lead character to pull this one off because the story centers on the struggles of Cohen, and only him, making it necessary to successfully portray the qualities of this person, that which what made him triumph over his condition, and achieve his dream to become a teacher.

While the performance of Cohen was great, the lines delivered  (mostly derived from its adapted novel), sometimes have emotional impact but most of the time it lacks the depth needed for it to fully connect to the audience.

But in general, this film shines because of the simplicity of how it told Cohen’s story: a man with affliction who never gave up until he achieved his dream. Front of the Class makes us see the world a little brighter, and say “I will” instead of “I can.”

Out in the Dark: I didn’t plan to fall in love with you.

Nimer, an ambitious Palestinian student in the West Bank, dreams of a better life abroad. One fateful night in Tel Aviv, he meets Roy, an Israeli lawyer, and the two fall in love. As their relationship deepens, they are both confronted with the harsh realities of a Palestinian society that refuses to accept Nimer for his sexual identity, and an Israeli society that rejects him for his nationality. When Nimerʼs close friend is caught hiding illegally in Tel Aviv and sent back to the West Bank, where he is brutally murdered, Nimer is forced to choose between the life he thought he wanted and his love for Roy.

It began with a nighttime scene, a nod to its title and a promise of what to come. At first, the audience might think that it portrayed a simple plot, just two protagonists meeting in a club, and one of them sure could have a problem and that’s just that. But the setting takes the plot deeper: a club in Tel-Aviv; and deeper: the characters, two men, one Israeli, the other, a Palestinian; and deeper: one has a link to an anti-Israeli group. 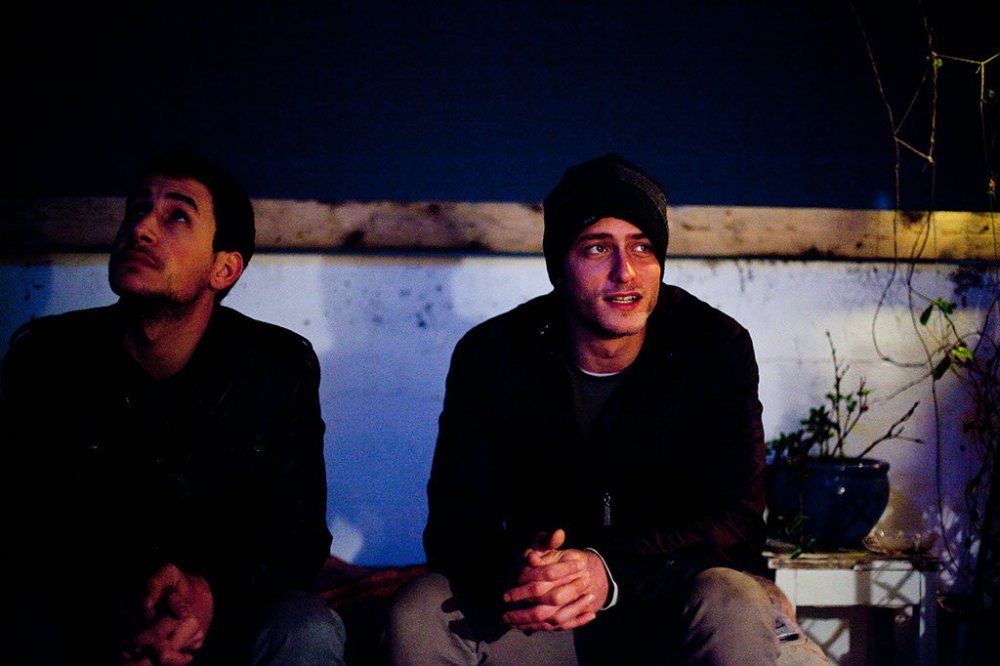 Cinematographer Ryan Aviad shoots the film digitally, using natural and available light as much as possible, while the deeply thoughtful music heightens the tension especially in the end. These made the scenes more starkly realistic as the close-up shots of the characters’ faces to show their emotions, that would eventually tell their stories.

Out in the Dark presents the realities in the Middle East, in the land shared by Israel and Palestine, without delving into the historic details, daring the audience to know more about their story afterward if they don’t already know. The film shows us the cultural boundaries of Israel and Palestine, and the lack of boundary separating its peoples’ political and cultural realities. It does not discriminate. For one, it might be leaning towards the Palestinian’s case. Roy Schaffer, a lawyer who has enormous connections through his powerful family, was shown as blinded by the realities around him. His safe world made him ignore the situation around him albeit he is aware of it, a casual observer, neutral. That is until he met Nimer.

At first glance, it seemed that there could be no problem. Nimer Mashrawi is from Ramallah with a permit to study in Israel. But then we met his family with a culture adverse to a same-sex relationship and a brother with a deep hatred towards Israel. The resolution could be easy, but the plot deepens as the Israeli Security Service comes into the picture and Nimrt was caught in a tangled conflict beyond his control.

The Palestinian group here was credibly portrayed exuding an air of legitimate fear. The same could be said of the security service. With the two worlds colliding, so was the worlds of Nimer and Roy.

There were passion and chemistry on how the actors portrayed Nimer and Roy. While Nimr’s character has much more drama in his story, Michael Aloni who plays Roy, portrays his character in a convincing manner, giving a lifeline to a drowning Nimer. Nicholas Jacob, meanwhile, has had a difficult but impressive time portraying Nimer, from his exile to being trapped between opposing forces while trying to hold on to Roy. There love story was not as much as forbidden as it was complicated and dangerous.

Director Michael Mayer made sure that Out in the Dark is not your conventional love story. The raw emotions exuded by the actors, and the artistic shots, combined to present a thrilling climax. The ending was clear as day but on closer look, it was really vague because it gives the audience hope for a different ending, even though it might not exist at all. 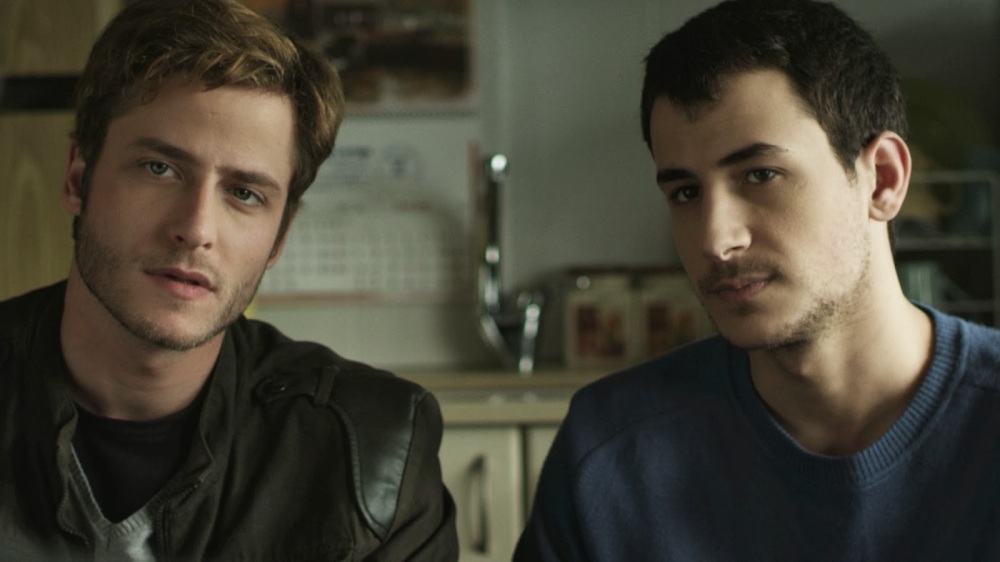