For our TV series volume 3 review, we go from the much-awaited Scandal and How to Get Away with Murder crossover to the death of Jedi Kanan Jarrus in Star Wars Rebels, plus our thoughts on the capture of Aaron Shore in Designated Survivor.

#7 The Flash: Bring Back the Comedy

We’re slowly getting tired of hearing about DeVoe, just like Savitar. And also we’re slowly getting tired of the metahumans (there are apparently three of them remaining) that they supposed to find. The humor was gone, the storyline drying up, the characters were getting boring, someone should save this season from complete doom. But we still like Barry Allen, wearing the Flash costume, we just think that a grand gesture of some sort is in order to jumpstart this series. 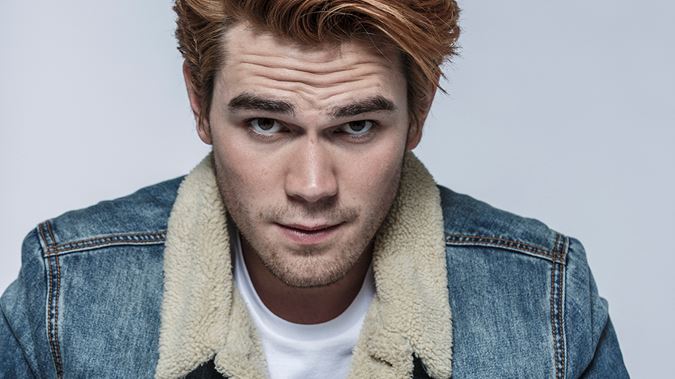 Midway through the latest momentous episode of Riverdale, the rapid-fire pacing of the series takes a break for a minute to focus on a scene between Archie and Jughead where they are just allowed to be friends. No maple syrup blood feuds, no masked marauders (yet), no weight of the world on their shoulders. Just two best pals sitting in the wilderness has a laid-back talk. It’s something that we’ve rarely witnessed on the series to date, so it’s understandable if viewers not familiar with the Archie comics themselves don’t understand just how important the friendship between these two characters is. But for a fleeting second here they are onscreen, gossiping about their girlfriends and just being teens.
(http://www.denofgeek.com/uk/tv/riverdale/55834/riverdale-season-2-episode-14-review-the-hills-have-eyes) 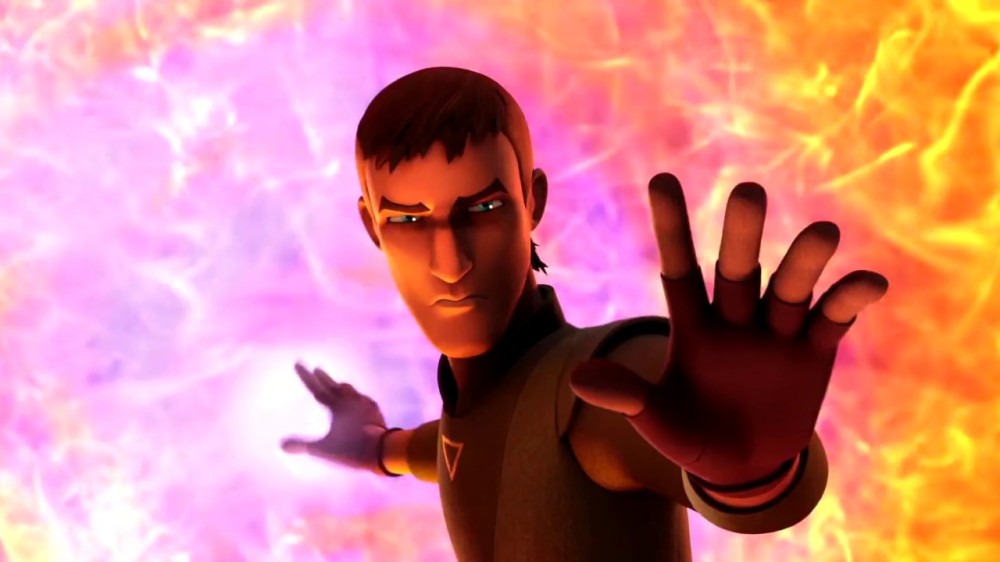 Disney spoiled this to us right before we watched the new episodes, shame on you Disney. The death of Kanan Jarrus was not something you would be awed with, like the death of Master Windu or Obi Wan, but the series still tried to make his death meaningful, blowing up the oil depot vital for the manufacturing of tie fighters project, which we were told was more important than Project Star Dust (we don’t believe it). First off, it was not Jarrus’ doing, he did not have a choice. But the heroic act was not lost to us, the shield was cool by the way, as Jarrus blocked the incoming inferno from devouring the Ghost, thereby letting the crew escape, without him.

We were saddened by this sudden death of Jarrus, we know that all remaining Jedi on this series will die before the Battle of Scariff, paving the way for Luke Skywalker, but still, we were not prepared for it.

Following that tragic death was the episode featuring the mystery of the Mortis Gods (Father, Son, and Daughter) and the appearance of the emperor who was trying to solve the mystery of the Jedi (he did not know it all then?). All to link Jarrus’ death story which was lame, or okay maybe not that lame. It was just somehow boring and tiring. Oh, and Ahsoka Tano was there too, alive and kicking.

It’s Vegas time in This is Us and in this episode, we explore the relationship (or none thereof) of the trio with Beth and Toby, during Toby and Kate’s bachelor/bachelorette parties. Deja’s story was also featured here, which will result in a conflict between Beth and Randall. While Vegas is emotionally charged, what we enjoyed most watching was the Pearson family with the alive and kicking Jack Pearson, featured here as they celebrate their anniversaries every year. There was something light and fun as we watched the young trio prepare for their parents anniversary.

The writers tried to link the two stories together, highlighting the Randall and Kate relationship which got shattered apparently when Beth arrived, thus the lack of Kate and Beth’s relationship. But we feel that these two stories are apart from each other, and for us, that’s okay. 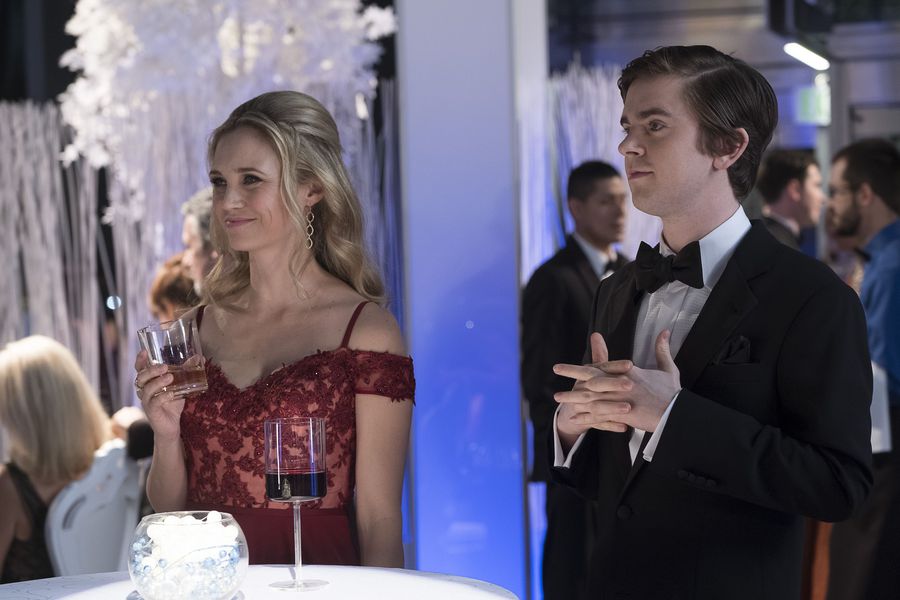 The heartwarming stories continue in this series as Dr. Shaun Murphy tries to navigate the chaotic world of speaking to other people and understanding their behaviors. Question, why did he not do that in college? Anyway, there was an annual gala which required all the doctors to wear a tuxedo, so of course, Murphy bought one which costs $2,000 or more.

Also, there was an all familiar story in here where a murderer wants to donate his heart to the sister of his victim, paving the way to a moral dilemma.

The dynamic between Dr. Morgan Reznick and Murphy was on full display and we think this is more effective than that with Dr. Claire Browne, no offense, because Reznick tends to push Murphy out of his comfort zone while Browne just comforts him, which is not a bad thing either.

And there you have it. Olivia Pope and Annalise Keating united. Frankly, we’re expecting two powerful women, equally powerful, to be showcased on the crossover but we realized that Keating’s character was not built that way so the result was Pope was center stage all throughout the Scandal and How to Get Away with Murder episodes. But no matter. Keating’s brilliance, mixed with her emotional vulnerability and just the pure rawness of her character, captivates the audience, at least those not familiar with her. There was something real about her character, something that connects. Pope, with all her power, could not have that connection with ordinary people, but watching her do her stuff around Washington was beyond cool. Together, they compliment each other and make a perfect team.

Scandal’s storyline made it inevitable for its characters to dominate the story, with all their Washington power. The Scandal ep was fun to watch as the QPA and the White House spar with Olivia Pope in the hope of shutting her down “for good.” The HTGAWM ep, on the other hand, well we could not understand it seeing that we’re not following the story. There was something rushed on how they introduced all the characters, like being introduced to the members of a very large Mexican family. But we immediately saw why this series is special. That courtroom battle was epic, and that scene will be the one to be remembered when we look back on this crossover.

Also, the episode after this much talked about crossover was cool, the hijacking of Air Force 2 might be a little bit too much veering on a cheap Hollywood movie but they pulled it off smoothly, thanks to the characters and how the script was written. And now, watch out for Vice President Beene.

President Tom Kirkman is back and we’re hoping that the second season will return to the captivating story of the first one. We’re sad to know that Kirkman’s wife died in the vehicular incident, we’re sort of hoping there might be a twist on it. So with that storyline, we find a changed Kirkman and a White House in a mess. To “kick start” the whole executive branch, they decided to have a grand project: the opening of trade with Cuba. It’s all good and all of it until the trade delegation was captured by rebels, the bad news is, the national security advisor, Aaron Shore was with them.

First, why do these writers love to put Aaron Shore in peril? Why? We like all of the White House officers, don’t touch all of them, back off writers.

The entire premise of the new episode was how Kirkman will navigate the situation, a Kirkman who was now more cautious than ever, who was afraid of losing more of his closed associates. But in this case being safe might be deadly.

The new Designated Survivor is not still at par with the first one, but the characters and the story which make this series special are still there to stay, and we think the building of secret plots, which will be revealed as the season progresses, is worth watching (the guy who killed Kirkman’s wife in particular), and therein lies why we’re sticking with this series. And because of Aaron Shore and Seth Wright in particularly of course.