Let’s face it, after that taped convo of Republican presidential candidate Donald Trump  bragging about sexually assaulting women, his hopes of getting the women’s vote has gone from zero to umm negative something. So just for fun we compiled some list of politicians (including Democrats because we’re insane) who could replace him and definitely win not just the women’s vote but the vote of all of humanity for that matter. 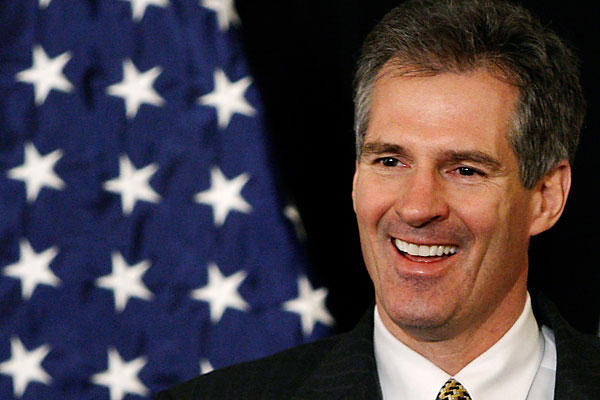 This first one is a Democrat so that’s a no go, but before we move on, we took a look at his website. But there seemed to be no such site so we visited Biography.com. According to that site, Scott Brown was born in Kittery, Maine. He was part of the National Guard and worked as a lawyer before serving in the Massachusetts legislature from the late 1990s. In 2010, he won the race for U.S. senator in a special election for Ted Kennedy’s seat, but lost in 2012 to Democrat Elizabeth Warren. Brown has since resumed private practice and worked for FOX News.

Senator Martin Heinrich is a United States Senator for New Mexico. Elected in 2012, Heinrich serves on the Senate Energy and Natural Resources, Armed Services, Intelligence, and Joint Economic Committees. He is the Ranking Member of the Subcommittee on National Parks and a member of the Migratory Bird Conservation Commission.

With a background in engineering, Heinrich brings a unique perspective on how to create the jobs of the future, and protect the vital missions at New Mexico’s national labs and military installations. He is a strong advocate for middle-class families, a longtime friend and staunch ally of Indian Country, and a champion for New Mexico’s treasured public lands and burgeoning clean energy economy.

Those are from his website (we actually has one) but we can’t place his entire biography here because it’s a bore. And oh, did we mention that he is a Democrat. Again, fail.

For this one we will be citing from the ever reliable Wikipedia. Aaron Jon Schock is the former United States Representative for Illinois’s 18th congressional district, with service from 2009 until 2015. He is a member of the Republican Party. The district is based in Peoria and includes part of Springfield. He was the first member of the U.S. Congress born in the 1980s (and thus at the time he took his seat in 2009 he was the youngest member of Congress). Previously, Schock served two terms in the Illinois House of Representatives and was its youngest member. On March 17, 2015, after controversy about his use of federal funds, Schock announced his resignation from Congress, effective March 31.

Schock received an unusual amount of media coverage during his first term in Congress, much of it focusing on his physique and youthful appearance.According to The New York Times, he has “cultivated an image that is more about lifestyle and less about lawmaking.”Schock was selected “hottest freshman” congressman in a February 2009 reader poll on The Huffington Post. Schock has been frequently targeted by TMZ.com reporters since his arrival in Washington. Schock told CNN’s Reliable Sources that such soft media coverage could increase voters’ interest in politics. “People who watch TMZ or different mediums don’t expect to see their congressman on such a show”, he said. “To see their hometown congressman on a show like this kind of raises their interest and gets them a little excited.”

In 2009, Schock appeared on The Colbert Report, during which the host, Stephen Colbert – making fun of the TMZ reports – “grilled” Schock about his “six-pack abs”.Schock went on to appear on the cover of the June 2011 issue of Men’s Health, which one commentator decried as evidence of “a narcissism that never rests”. Schock appeared on Season 7 (2010) of Top Chef, a competition reality-television program, as a guest judge.

In 2012, Schock told Roll Call that “I’m a big believer if you want to change people’s minds or get someone to vote for you, either a voter or a colleague, you’ve got to first get their attention. If people don’t know who you are, they’re not going to listen to your message. And not everybody pays attention to politicians by watching Fox News and CNN.”In May 2013, Schock was nominated for and included in a Time magazine poll titled “Who’s the Most Influential Millennial?” Schock’s sexuality became an issue of speculation, leading him to deny he was homosexual.

Senator Marco Rubio has a website and his biography (autobiography) is in first person, so here it goes, let’s hear it from the good senator from Florida:

“When I was elected to the United States Senate in 2010, I set a steadfast objective for myself while in office: to help bring the American Dream back into reach of those who feel it is slipping away. That’s the goal line I strive toward with my every effort, and it’s the measure I use to keep score.

“The reason I’m so passionate about restoring the American Dream is because I’ve lived it myself. My parents came to America from Cuba in 1956 and earned their way to the middle class working humble jobs – my father as a bartender in hotels and my mom as a maid, cashier and retail clerk. By their loving and powerful example, I learned the importance of work and family, and developed the belief that all things are possible in America.”

Ok so let’s stop on that. Rubio finished something on the bottom on the recent Republican primaries but he’s from Spanish decent so it could help.

The highest elected official of the Republican Party, House Speaker Paul Ryan was Mitt Romney’s vice president last 2012 elections, where they of course lost. But between him and Trump, we’ll definitely vote for this guy. Anyway, here’s his biography or something (from the House website):

Born and raised in the community of Janesville, Paul Ryan is a fifth-generation Wisconsin native. Currently serving his ninth term as a member of Congress, Paul works on many important issues affecting Wisconsin residents and is an effective advocate for the First Congressional District.

In October 2015, after then-House Speaker John Boehner retired from Congress, Paul was elected House Speaker. A committed conservative and public servant, Paul has spent his life advocating for real solutions that will expand opportunity for all Americans. And to the speakership, he will bring that same passion for getting results.

Paul is a graduate of Joseph A. Craig High School in Janesville and earned a degree in economics and political science from Miami University in Ohio.