Here’s Geek God Review’s wrap-up on some of this week’s news on TV series, music and books from the development of the comic character Black Lightning as reported by ibtimes.com, to Arrow’s Stephen Amell speaking up on DC’s extended universe via Cinemablend, to the much anticipated second book of Rick Riordan’s Magnus Chase series: The Hammer of Thor.

TV Series: Greg Berlanti, the man behind The CW’s “Arrow” and “The Flash,” developing “Black Lighting” 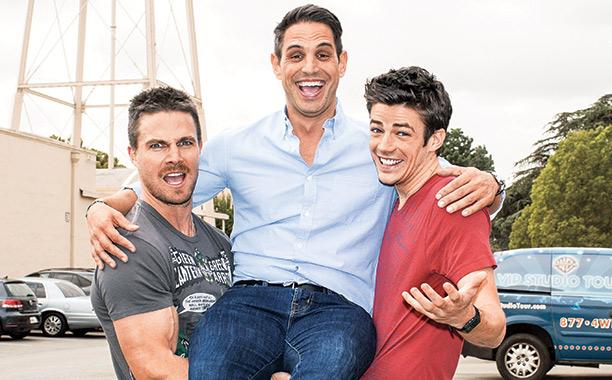 Greg Berlanti is bringing another DC Comics superhero to TV!

According to Deadline, Berlanti — the man behind The CW’s “Arrow,” “The Flash,” “Supergirl” and “Legends of Tomorrow” — is developing “Black Lighting,” a superhero series based on the DC Comics character of the same name created by writer Tony Isabella and artist Trevor von Eeden.

Berlanti has teamed up with “Being Mary Jane” creator Mara Brock Akil and her husband Salim Akil for the small screen project, which would follow the story of retired vigilante Jefferson Pierce who falls back to his old ways after his daughter becomes hell-bent in seeking justice, and a local gang starts to recruit his star student.

The Akils are writing the series and exec producing with Berlanti Prods.’ Berlanti and Sarah Schechter.

In DC Comics lore, Black Lightning is a superhero with the ability to generate and control lightning. Before becoming a vigilante that took down organized crime groups in Metropolis’ Suicide Slum, Jefferson was originally a high school principal and an Olympic-level athlete. Although he retired briefly to become secretary of education under the administration of president Lex Luthor, he eventually became a member of Batman’s team of Outsiders for several years. At some point in the comics, he has also become a member of the Justice League. (*1)

Books: The hilarious Magnus Chase chapter titles are back starting with Chapter 1: Could You Please Stop Killing My Goat?

Thor’s hammer is missing again. The thunder god has a disturbing habit of misplacing his weapon–the mightiest force in the Nine Worlds. But this time the hammer isn’t just lost, it has fallen into enemy hands.

If Magnus Chase and his friends can’t retrieve the hammer quickly, the mortal worlds will be defenseless against an onslaught of giants. Ragnarok will begin. The Nine Worlds will burn. Unfortunately, the only person who can broker a deal for the hammer’s return is the gods’ worst enemy, Loki–and the price he wants is very high.

Note: You can read the first two chapters of the second book of the Magnus Chase series by clicking the link below this article. World-wide release is on October 4! (*2)

The 22-year-old One Direction singer is reportedly set to work with Shawn Mendes very soon on some music!

“I’ll definitely be working with Niall very soon,” Shawn told The Daily Star. “I got a chance to speak to him recently and we are definitely going to write together.”

Shawn added, “We are going into the studio as soon as we can get our diaries together and see what we come up with. I would love to do something for my next record as well as his – we will have to wait and see.” (*3)

Kevin Zegers (The Mortal Instruments: City of Bones) is set as a series regular in ABC’s drama pilot Notorious. The project, from Sony Pictures TV and Jeff Kwatinetz’s The Firm, was inspired by the relationship between famed criminal defense attorney Mark Geragos and longtime Larry King Live executive producer Wendy Walker. Written by Drop Dead Diva creator Josh Berman and blogger Allie Hagan, Notorious is described as a provocative look at the interplay of criminal law and the media. Zegers will play Oscar Keaton, a billionaire playboy who created one of America’s biggest social media companies that went public two years ago. Zegers starred in Fox series Gracepoint and next will be seen in Derick Martini’s The Curse of Downer’s Grove. He’s repped by UTA, Untitled and Hansen Jacobsen. (*4)

If you’ve been paying any attention to the world of TV and movies you’ll notice one trend: Superheroes are everywhere. Between the Marvel Cinematic Universe, DC Extended Universe, and the various television properties that each company produces, you can’t turn a corner without running into a comic book adaptation. And while this is exciting for fans, it can get a bit confusing when trying to differentiate each set of stories. The DCEU has completely separated itself from The CW’s Arrowverse, and as such there are two versions of a handful of DC heroes.

Stephen Amell plays Oliver Queen/ Green Arrow in Arrow. While participating in a panel during Salt Lake Comic Con, Amell was asked how he’d feel if Green Arrow was recast for the big screen. Luckily for us, one busy Youtuber captured it all on film. Here’s what he said. (*5)