With all the directions gone,

Or if it’s a lantern that you

Have to keep switched on…”

I delayed writing the review of these books because I decided to finish the series first before doing so. It turned out that the last one, “Rebound” was pretty hard to find in any bookstores here and I was having problems on downloading a e-book copy. But I got the chance to finally read it this week so here you go. 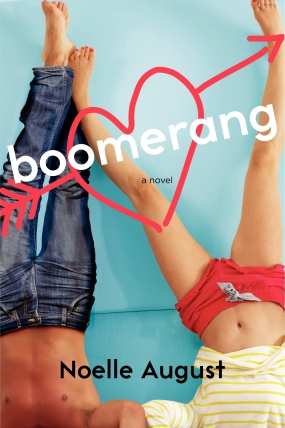 “You have to find the thing that makes it worth it. That turns that life you didn’t want into something you do.”

Even before I read this book I have qualms about it, seeing that the story is so typical it could make you puke. The cover did not help either, but I plunged on and even though my suspicions about it were kind of correct (about it being a sucker and other things like that) I still think that my time was not wasted upon it.

This is about Mia and Ethan, both trainees on this dating company called “Boomerang” and on how they battle it out for the one lone spot on the company’s employee pool, all the while resisting their feelings for each other.

This is the epitome of a YA novel and a few chic flicks movies out there but it played to its strength (which is to be a super YA story) and made the story light and fun to read. By knowing that the story in itself would not be anything deep, readers will just find themselves enjoying the life of the characters as they struggle on their life dramas, which are pretty much the real world out there.

I could relate to Ethan’s character more than that of Mia’s, which was not a shocker. Though Mia’s story was basically front and center on this book, I find her life too peppered with unrealistic things. Her family being rich, her mother being famous and her circle of friends who seemed to be perfect are the flaws of her character, one which prevented it from being real, or from being taken seriously, though her life struggles, her ambitions to carve a path on her own made her somewhat interesting, making the story of the book deeper, having more meaning.

Ethan’s story is colorful albeit even though only to complement the story of Mia. His thoughts and struggles are more real, relatable (at least to me) and with less drama, it made the book less YA-ish and more on to a serious one.

The ending will be the same story as you know it, the conflict too dense it will make you laugh. The characters sadly could not salvage its poor plot from the start, but it made the most of what it has and turned this first novel into a light read, something you will enjoy.

I shouldn’t read this one, I thought back then, seeing that it was the story of Adam and the way he was portrayed by (mostly) Mia to me on the first book was that he was a douche albeit a perfect ken doll. And to make things worse, he was partnered to Ethan’s former girlfriend in the story who is the epitome of all the mean girls in every movies out there: smart, beautiful, tall, and criminally rich and a bitch. So I thought nope. But then it’s a pity seeing that I have a copy of the second book with me so I delved in, again.

The series continues in the second novel this time focusing on Adam, the owner of “Boomerang” and his tragic past love story. He will meet here the former girlfriend of Ethan (of course to make things as YA as it could be) who happened to be the daughter of his future business partner. The plot? You already can deduce that from here.

This is a much better book than the first one, first because the plot has improved and the characters’ life is more interesting, their thoughts more engaging. Adam’s character, his life and the way he thinks and does things made all the difference in the story and it certainly shifted the series from being a mediocre into a one which could be after all decent. His thoughts are more mature and his past more complex that reading him adds only to the intrigue of the story. Though he was made to be a rich man with super killer looks I was not appalled by it mostly because the circumstances of his character, the way his background was built, called for it.

Allison, the former girlfriend of Ethan, has been made interesting by her equally compelling background story: a party and spoiled rich girl who have seen the errors of her past and at the present, her struggles to live up to their family name. I know it sounds cliché and looked like an ordinary plot but the way it was presented to us through Allison’s thoughts made the story deeper.

By reading their thoughts, readers get to know them better, dispelling the image of them (mostly negative ones) created by Mia and Ethan in the first series. As I said, the plot has improved; it was a common plot but the character’s story made the story deeper. The chemistry between the Adam and Allison, their conflict and their relationship are more mature, (not to mention the cool ending).

It was frustrating not to read a book knowing that it is the last part of the series you’ve started. But “Bounce” by far is my favorite book among the three novels. I don’t like Mia and Ethan’s story because it somewhat showcases all the things that make you puke will reading a YA story while Grey and Skyler’s story borders between teenage problems and adult problems, clashing both to make a compelling plot.

The last part of the series centers on Adam’s brother Grey and (to complete the circle) one of Mia’s bestfriend Skyler. It focuses on their separate choices in life: for Skyler, her venture to the world of movies and cameras (care of Boomerang studios *smirks*) and for Grey, his typical teenager angsty life. And oh, he wants to become a lead singer of a band. How they met and how they end up together (or not, so as not to be a spoiler), is the plot and story of the novel.

The characters from the last two books (plus more and more!) propped up on this last series making the story somewhat chaotic, like for instance including Mia’s other bestfriend Beth like she’s somewhat a part of this series (I will not be surprised if we have her as the protagonist next time).

I like Skyler’s story because amongst all of them, I could relate to her more, the one where she struggles to reach for her dream and passion while supporting her family. Her thoughts are like that of Adam’s, more mature but relatable at least to younger readers.

On the other hand I find Grey more attractable, rugged but a perfect match to Skyler. Their story has more “flare” than the last two (though not as passionate as Adam and Allison’s). Grey’s conflict was ordinary and it failed to be deeper though it tried. His and Skyler’s relationship story has a light conflict in it but did not have the drama of the second book so that was cool.

The story is peppered also with ridiculous and unrealistic things like in the movie-like portion in the end where all of their friends came to watch their concert and a big-shot music producer recruits Grey and it was all happy, happy, happy. Also the one in the start where Skyler gets the lead part in the movie (necessary in the story) and how all of them most of the time seemed to be one happy bunch of characters (Beth forgiving Skyler for stealing the lead role from her, a gay but extremely handsome male lead star and so on).

Despite of this, it is a much better book than the first two because it did not try hard to be something that it is not. It just anchored on the characters and their story, which lacking the heavy adult problems of the second book, presented life as it is, light but with few bumps along the way.

Compared to the Anna and the French Kiss series by Stephanie Perkins, which has connected characters but independent stories, this series have stories tangled with each other, the shift just focusing on different characters. This is not to say that it is a bad thing, but frequent ridiculousness of the flow stories, of the characters itself seemed to emanate from this style.