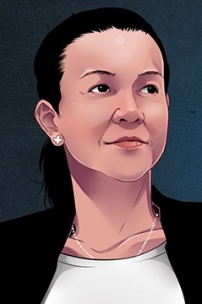 A neo-phyte senator, she is close to the present administration which could mean a certain amount of continuity (of the good stuff hopefully) but also critical with the incompetence of the government, so she’s perfect.

I have more experience cataloging news videos and archiving it than her being a public servant which is not a bad thing but is a bad thing because really have you heard of the word Experience?

Let’s do the math, 9 years and 6 months as Philippine resident? Not good enough as per that document called the Constitution.

Poverty Alleviation. She plans to achieve this by having a sustainable inclusive growth which I read on her site with no specifics. She also said she will focus on family building which I construed as her plan to have more babies? I’m lost. There is also a sub-section “Mobilizing Good Will” which after reading it I said to no one in particular “What does that even mean?”

But here are some good agendas under this section. In the sub-section “Good Governance, she said “I believe that good governance is the key to make government an effective tool for poverty alleviation. I support the administration’s efforts to make “tuwid na daan” as the benchmark in our Philippine political and economic life.” So she is recognizing this effort. Good for her. There are also well-thought proposals under this sub-section, such as private sector initiatives to build anti-corruption integrity circles in government and in private companies, as well as, enactment of laws that provide access to information about government transactions. Though she needs the backing of Congress, it shouldn’t be hard for her I imagine.

This is also a good part: “We should promote the use of information technology to provide government services and engage our people in dialogue. We should use the internet as an expanded arena for policy making. Our people’s rights should be properly protected in online discussions.” Yey internet!

She will also review existing government programs which all of them will do I’m sure.

Her two other main platforms: Opportunities for Children and Electoral Reform are so boring I could not even write about it.