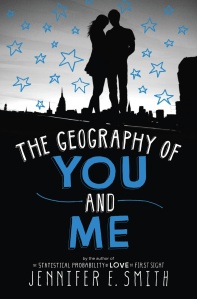 The Geography of You and Me

“The point wasn’t the distance, it was the homecoming.”

I always believe that good books are those with many highlights in it, however trivial. The Geography of You and Me certainly is one of them.

The book is the story of Lucy and Owen, who, after their fateful meeting at the top of a tower in New York, both found themselves engrossed in their own lives, traveling different places but while always apart, they kept in touch via postcards, hoping that someday, their paths will cross again.

Here are the words of the guy Owen, musing about his relationship with Lucy:

“If you were to draw a map of the two of them, of where they started out and where they would both end up, the lines would be shooting away from each other like magnets spun around on their poles. And it occurred to Owen that there was something deeply flawed about this, that there should be circles or angles or turns, anything that might make it possible for the two lines to meet again. Instead, they were both headed in the exact opposite directions. The map was as good as a door swinging shut. And the geography of the thing—the geography of them—was completely and hopelessly wrong.”

I can relate somehow on Owen’s frame of mind, which was summarized in page 205: “most of what in his heart were things that he wished, rather than the things he was thankful for.” I do not agree that there was a necessity for him and his father to travel away from their home after his mother died. But then they both lost something precious to them and they both felt the need to escape that ghost of their past. While they were optimistic that things would change for the better, I believe that Owen’s journey could somehow be lighter (minus all that gloomy thinking) if he could just be thankful for the things that they have rather than chase the one they think they ought to have.

Lucy’s story and her way of thinking, on the other hand, were very straightforward. She met Owen, felt something like a connection but she wasn’t sure if that was true. She had a problem on her own with her unemotional family, and when it came to it, she chose to live her life as it was, trying to forget the boy she spent time with on the top of the tower, and moving on, which was somehow a normal thing to do.

I remember saying to a friend, (after reading several pages of the book) that it looked like a spin-off of Looking for Alaska, trying to be profound, but I was very wrong. The book has a unique story of its own, while the plot is simple: two lovers apart. The journey of Owen and Lucy is simply breathtaking, the way the readers learn something from their travels. Amidst the simplicity of the backdrop, you could actually feel the sincerity of the characters and thus learn things only traveling could provide. While accompanying Owen and Lucy through their journey, readers could also discover new things about themselves.

The Geography of You and Me is not that great, if you would compare it with the others. But all books stands alone for various reasons, and is special on their own ways. This book is no different. While it could be dismissed as another YA novel displayed on the shelves, there is something this book offers that once you read it until the end, you will be thankful that you finished it through, and afterwards the story will be special in your eyes.

As for Owen and Lucy, I’m glad there’s New York for them.

“I don’t know,” she said. “All those beautiful buildings and cathedrals…”

“You mean all those postcards.”

“Yeah,” she admitted. “All those postcards. They’re very selling.”

“What do you want to see most?”

“Notre Dame,” she said without hesitation.

“Why?” he asked, expecting to hear something about the architecture or the history or at least the gargoyles, but he was wrong.

She nodded. “There’s a little plaque with a star in front of it that marks the spot: Point Zero. And if you jump on it and make a wish, it means you’ll get a chance to go back there again someday. There’s something kind of magical about that, don’t you think?”

“It’d be nice if every place came with that kind of guarantee.” He leaned over to draw an X between them with the piece of gravel, then rubbed it out with the heel of his hand and replaced it with a crooked star.

“Does that mean we’re in the exact center of New York?” she asked, nodding at it, and he felt momentarily unsteady beneath her gaze.

“I think,” he said quietly, “that we’re in the exact center of the whole world.”

She held out a flattened palm, and it took a moment for him to realize that she was asking for the rock, not his hand. He passed it over, and she drew a circle around the edges of the star, then scratched the words Point Zero along the outside.

“Every year was like a rerun of the same boring show, everyone else moving fast all around her, a blur of people and plans and conversations, while Lucy remained alone in the middle of it all, standing absolutely still.”

“The straggler, the missing beat, the odd one out. The single speck in the emptiest part of the sky”

“Soon enough, his shapeless future would start to mold itself into something more concrete.”

“The point wasn’t the distance, it was the homecoming.”