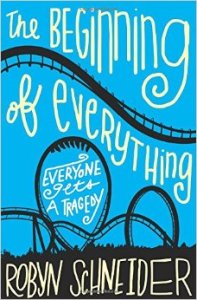 The Beginning of Everything (formerly: Severed Heads, Broken Hearts)

“But we had plenty of time for youthful indecision, both apart and together, for limping into the future past the unforgettable ash heaps of our histories.”

Like a roller coaster, like the Thunder Mountain Railroad in Disneyland, this book had me changing my opinion of it until the very end. It seemed alright at first, then cheesy, then downright sucker before it redeemed itself and become one of those books that you will remember over and over again.

My fault was that I was quick to judge the main character, Ezra Faulkner, a once popular guy in school, tennis player, dating the hottest girl in town (you get the picture), until a car accident changes everything in his life. Of course, the guy has a lot of anger and frustrations after that and seeing that it is his point of view you get carried away with it, forgetting that his way of thinking might not be the one that is being played in the real world. But I hated Ezra since the start, thinking that he should suck it up and live with it. I mean, I was so focused on his emotions that I already decided that this book sucks because of how ordinary the story might be. He fell from glory, joins the loser guys and fell in love with one of the loser girls. End of story.

“I discovered long time ago that the smarter you are, the more tempting it is to just let people imagine you.”

Except that it was not the way it is. This was one of the strong points of the novel, that despite being a first person point of view story it still managed to relay the other points of view of the other characters making it vibrant, making it more real, because the truth is, in the real world, nothing is what you think it seems to be.

It turned out that the other popular guys did not think of Ezra as a loser after losing his leg, and that the poplar students and bullies have problems too, although it does not justify their actions. By letting us glimpse to the lives and emotions of students, popular or geeks, the book teaches us how to navigate the difficult lives in high school and even beyond, to face the changes that came our way and be ready for surprises.

The only thing that bothers me is how the authors like protagonist girls with a Margo Roth Spiegelman character. It grows tiring after a while. Girls who like adventures, mysterious, not your usual cheerleader are good contrast to what the popular girls are like nowadays but fielding an ordinary girl might work better with this one (like Harper in Something Like Normal). Well the whole debacle was explained at the end of the book so it was justified somehow.

The debate event and the after party

“It was as thought I’d gone off on epic adventures, chased down fireworks and buried treasure, danced to music that only I could hear, and had returned to find that nothing has changed except for me.”