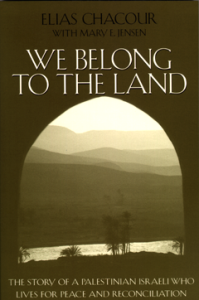 We Belong to the Land

“It is better to have the right than the might, because might corrupts. It declares the right to be wrong and the wrong to be right.”

This book proved that I was wrong, in many accounts, about the conflict in the Palestine. Of course, what do you expect, I grew up reading the Holocaust and watching all those terrorists bomb their way in the world. I never even paused to comprehend the story of the other side, if the story of what I have read, seen and heard was the truth, the partial truth or a complete lie.

“Stronger than the Storm”

We Belong to the Land is the story of Greek Catholic Priest Fr. Elias Chacour, his struggles to build a better place for the Palestinians displaced by the creation of the State of Israel in 1948, (Recognized: 1949) and his attempts to have their cry be heard in the outside world. The book does not dwell on whose side is right and whose side is wrong, it just wants to relay a single message: “They, Palestinians, want to live in peace, alongside with any other ethnic group, because, they belong to the land.”

“As long as the oppressors have their boots on our mouths, we cannot even speak forgiveness.”

The book is purely honest while being admirably courageous in speaking up its mind. It has no qualms in revealing the bad side of the Palestinians but also it is not afraid to voice out the injustices of the Israelis. It was a refreshing read for me, because I rarely read books about the Palestinians, I just assumed they were mostly bad. But I enjoyed reading their life, their daily struggles while learning about their culture, their history and their dreams for the future. We Belong to the Land somehow functions as a history book and I particularly liked reading the events I have came to know from other history books. What differs it from those books, however, is that it was told by a person who has been there himself, thereby giving the reader a good learning experience, making those historical events came to life, as if the reader is there, experiencing the noise, the emotions and the sensation of those events. But what makes this book special is the way it has revealed how we could eliminate terrorism, by delving into the reasons of why it exists (sometimes inching dangerously closer to agreeing with its objectives). By doing so, it makes us understand the framing of the minds of those behind terrorism, not so that we could understand them, but so we could prevent them from being what they are, therefore saving their lives and the lives of those around them. “pacem cum te” as they say in Latin.

The blessing of the tree to save it from being cut down.

The abduction of the goat to demonstrate the horrors and the reasons behind terrorism.

The struggles to build the school for Palestinians.

Favorite Quote/s: “It is better to have the right than the might, because might corrupts. It declares the write to be wrong and the wrong to be right.”

“Conveys . . . the journey of one man and that of an entire community to regain identity, integrity, and purpose.” –Middle East Journal

“The conflict of being a clergyman and a Palestinian Arab in Israel forms the backdrop for this human drama. . . .” — Library Journal