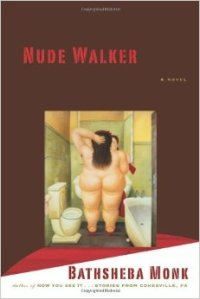 “My past was being stolen: things and places I had loved were being overwritten with a new story, a story in which I would have no say in how things turned out or how I would be remembered.”

An excellent book about the clash of cultures in this new era of constant change, Bathsheba Monk’s Nude Walker takes us into the bitter realities of a changing American landscape where people were facing choices between loyalty to family and loyalty to their country while throwing questions about the importance of heritage, of history and the truth about love.

Set into a fictional town of Warrenside, Kat Warren-Bineki returned home from her role in the Afghan war to find her town in the grasp of a great change. As a daughter of the town’s founder, she struggled to find her former place in a life which somehow managed to go on without her and her fellow Warrenside neighbors from the 501st infantry.  Once back she witnessed the bitter realization of the unfolding of a new chapter in their town where immigrants were now lords and the English settlers, the slaves. The events unfolded in which she took part of as she got entangled in a love affair with the heir of the towns’ new master, the Asads while struggling to break free from the bonds of her family’s glorious but forgotten past.

This book is a great addition to American literature as it presented the problems of the present day Americans about the influx of immigrants and the changes it brings not only to their culture but to their history. Monk tried to be objective in her narrative in this book by painting all three different cultures: the Native Americans, the English settlers, the new immigrants (the Arabs) as in some way or another, evil in varying degrees, but I think this is the flaw of this book. By doing so, it doesn’t offer any answers to the problem, leaving the readers to comprehend what should be done in this situation. If that is a good thing or not, I do not know.

I like the way the book was written with inter-changing perspectives from the characters while keeping the writing light, easy to read even with the intricacies of the cultures presented in the story. There is a good amount of love story that will keep the readers going on while at the same time making you think about different philosophies and contemplate on the problems that are not so old because those are the problems that we still are facing today. By having characters that are not shallow, Max and Kat in particular, the book transcends from being an ordinary story to a memorable one, a sort of an essay presenting a lot full of questions but sadly too little answers.

The airplane ride to Fort Dix

The events at Fort Dix

“Fire and fire make a conflagration; and Ice and ice is a frozen life.”

“Monk makes us see that we are all exiles in a changing world.” –Library Journal

“In Nude Walker, she (Monk) offers an unlikely romance about the fantastical myths we weave to define ourselves in unmoored times.” –Goodreads

“Nude Walker is a sound addition to recent literature about the slow decline of American manufacturing and the subsequent transformation of the socio-economic landscape. “If Warrenside was so great, why would its scions voluntarily join the army?” Monk writes. “It’s the myth that keeps you going, that you have somewhere to go back to, a cool town whose residents can hardly wait for your return. In truth you have lost your place in a cruel game of musical chairs.” –MostlyFiction