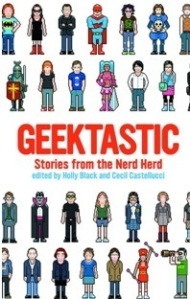 #9 Geektastic: Stories from the Nerdherd

“I liked seeing the look on the other team’s faces when I got a question they couldn’t answer. I loved their geektastic disappointment when they realized they weren’t good enough to rank up.”

The quote above was from “The Quizbowl Anti-Christ,” one of the 15 short stories from this book. Some of the stories were dragging, some okay, some cool enough to be a nerd story you could do in the big screen. The Quizbowl was my favorite because it was a straightforward, typical but unique story of nerds. You do a story about them going in a national quiz bee, make it look like an end-of-the-world war which most of the time was hilarious and you have good story, something that will stay with you. I don’t know if that makes sense.

There were other cool short stories in this book too, like “The Stars at the Finish Line” and “I Never.” The others were fine while the rest were kind of boring. So as a book, I had mixed reviews for this one. One thing is for sure though, you should not read this if you don’t know how to use a lightsaber, properly.

So I sat back while Sung rocked the relative areas of a rhombus and a circle, Wes sent a little love General Omar Bradley’s way, and Frances wrapped it up with Tashkent, which I had not known to be the capital of Uzbekistan, its name translating as “Stone City.” (from the Quizbowl Anti-Christ)

We always know what grades the other receives, what extracurriculars the other is involved in, what accolades or awards we earn, how many laps around the field we can do before getting winded. Getting into NASA requires being in peak physical condition, an advanced degree in something like astrophysics or aeronautical engineering, and that most mysterious of qualifications—the “Right Stuff.” Without saying a word, we push each other to be our best in every area. We “bring it on” every day. When I sit down to a test, I see Tabitha’s face in my mind, her eyes challenging me to beat her score. Before, I never cared much about grades; I just enjoyed learning for its own sake. Because of her, I now have straight A’s and am pretty sure I can get a scholarship to college, which my family never could have afforded otherwise. (from The Stars at the Finish Line)

A Jedi is never supposed to give over to his passions; he is always supposed to be in control. But last night, at some point between Coke Pluses, Master Sven must have spiked mine with a little bit of rum. My being such a lightweight might be a contributing factor in the mess I find myself in this morning. (from Once You’re a Jedi, You’re a Jedi All The Way)

“True to its subtitle — “Stories From the Nerd Herd” — “Geektastic” features the works of A-list writer-geeks who know of what they write, whether it’s video games, the school drama club or astronomy class. Though some stories seem rushed and lack character development, and others presume a fluency in “Buffy” and other subjects that are too difficult to comprehend for readers who don’t trip the world geektastic, the collection as a whole is high-caliber.” –Los Angeles Times

We are the stars which sing.

We sing with our light;

We are the birds of fire,

We fly over the sky.

Our light is a voice;

We make a road for spirits,

For the spirits to pass over.

Among us are three hunters

Who chase a bear;

There never was a time

When they were not hunting.

We look down on the mountains.

This is the Song of the Stars.

“Winning is a more abstract concept, and in quiz bowl, winning usually meant having to come back in the next round and do it all again.”

“To Storm or Fire the World Must Fall”

(Excerpts from The Blood of Percy and Annabeth: The Blood Olympus Book Review, written October 2014)

The Blood of Olympus, also known as the Blood of Annabeth and Percy was kind of a let down. I could think of some reasons why. 1) I am an idiot who knows nothing about this book (I object!) 2) We all were tired of grand endings. (Annabeth dropping to the depths of Tartarus, who could beat that?) 3) Leo died and I am still angry while writing this review.

Anyway, the book was not that funny unlike The Lost Hero and The Son of Neptune although you could argue that it was the last book so it should not be that funny and whatever. I especially liked their visit to Delos to see Apollo and Artemis (the gloomy twins) and their encounter with Hygeia. Insurance cards!

On the other hand, their adventures were great, much grander as we expected, the Hunters and Amazons versus Orion culminating with the Gods of Olympus fighting side by side with the demigods. And of course the final battle with Gaea. All hands down.

In the end, why would I remember the Heroes of Olympus series? Because they defeated Gaea? Or because Leo died? Nope. I think it is because of the adventures I, as a reader, somehow shared with the demigods.

The suspense, the stomach ache you get from laughing.

The donuts, the pizzas, the pegasi. (Popcorn, Our fatal weakness!)

The gods that you will hate and you will love (but most of the time you hate).

The monsters, the giants. Creepy.

And the mere smell of the book. The late night reading.

It was one hell of a ride aboard the Argo II. And for that thank you, Rick Riordan!

All parts, hands down.

Parents need to know that The Blood of Olympus is the last book in The Heroes of Olympusseries that spun off from the über-popular Percy Jackson series. It’s about teen demigods (who have one Greek- or Roman-god parent) on quests to save humanity from ancient monsters still at large in the world. Author Rick Riordan combines plenty of action and danger (usually not gory — monsters may get decapitated, but they disappear into dust when they die) mixed with lots of humor and learning. Some minor characters die from arrow wounds and from an explosion, there are many battles with injuries, and there’s a threat that one of the seven demigods will die as well (but we won’t give that away). The diverse cast includes Asian, African-American, Latino, and straight and gay characters. – CommonSense Media

“They rehearse their own illusions, until reality takes a turn and they are asked to rehearse for other things.”

David leviathan is back! Before that I am borrowing the summary from Kirkus:

Danny and Elijah are brothers who seem to have nothing more in common than parents and gender. Elijah is a free-spirited thinker heading into his last year at a private coed high school, and Danny is a type-A, up-and-coming ad executive. In an attempt to warm their relationship, their parents trick the two into taking a trip to Italy together. Elijah falls for—and beds—an older woman who is really more interested in Danny. Danny toys with the idea of pursuing her, but he becomes completely turned off by the way she treats his brother. Heartbreak, a walk down memory lane and a shared Jewish heritage bring the boys together to a believable degree as they return to their lives in the States.

Finally, a Levithan book which was not either a love story, a gay story or both. This book was kind that would suck you into its very pages (like the diary of Tom Riddle) from the very beginning, making you reluctant to get back to the real world afterwards. The story was light but with random humors but almost always in its passages, something you would reflect on. The story was so simple (two brothers who hated each other), the setting more than cool (Rome, baby!) and the plot not new that you would ask what makes this book special. The secret, I believe, was in the writing of the author and his ability to make a seemingly simple story to a book that would make you reflect about life, about family and about relationships that are important and those that are not.

One night, deep in December, Cal had asked: “Do you wonder why we wander?”

In an age of guidebooks, websites, and radio waves, discovery has nearly become a lost feeling. If anything, it is now a matter of expectations to surpass—rarely a matter of unexpected wonderment. It is unusual to find a situation that appears without word, or a place that was not known to be on the road.

The rain will not let up. For a moment, Elijah thinks he sees Julia, and his feelings zigzag. But it’s not her—not her at all. She is no longer a person in his life; instead, she is a person that other people will remind him of.

Levithan works his magic creating two real and round narrators in a series of poetic vignettes. The alternating point of view not only fleshes out the brothers and their relationship, it also keeps the simple story moving. Obviously written or at least set before the Iraq war, this beautiful glimpse of fraternal love will be at home in any public library’s YA section. –Kirkus Review

“How did my world get so small?”

I am riding the bicycle…(I am the Cheese opening words)

When I ride a bike, I feel a different kind of loneliness that from Cormier’s words: “something exclusive, almost sweet.” I am the Cheese lets us join Adam Farmer’s ride to visit his father while on the way experiencing the life on the road. Upon reading this book, you would be forced to Adam’s mind and the curious world his shyness brought to him. It reflects about what things are real in life and what things are just mere illusions. In a writing style that would make you feel that you are Adam himself, Robert Cormier takes us to the world of a lonely a person, a cheese left alone by the farmer, by the child, by the cat and eventually even by the rat.

Despite the complexity of the story, Robert Cormier sustains the suspense throughout the book, and the alternating chapters of interviews heighten the intrigue. Adam’s journey propels the reader forward, and the increasing mystery holds the reader’s interest all the way to the final, shocking chapter, which unravels the mystery. –Commonsense Media

“His terrible shyness, his ability to ease with people…he felt it was his basic character; he preferred reading a book…than hanging around.”

“He had never felt left out: it was his choice. To be a witness, to observe, to let the events be recorded within himself on some personal film in some secret compartment no one knew about, except him. When he knew irrevocably that he want to be a writer, that he realized he had stored up all his observations, all his emotions, for that purpose.”

“He felt apart from the other kids…but not the loneliness of isolation his shyness had sometimes brought him. It was a different kind of aloneness, something exclusive, almost sweet.”